Sikhism (Sikhi, ਸਿੱਖੀ in Panjabi) is one of the major world religions, primarily developed in 16th and 17th century India. "Sikhi" comes from the word "Sikh", and the word "Sikh" comes from the Sanskrit root "śiṣya" (शिष्यः) which means "disciple" or "learner". Guru Nanak Dev Ji was the founder of Sikhi. He was born in 1469 in the village of Nankana Sahib, near Lahore in present-day Pakistan. The faith system is based on the teachings of Guru Nanak Dev and ten successive Sikh Gurus (the last one being the sacred text Shri Guru Granth Sahib Ji) and is the fifth-largest organized religion in the world. This system of religious philosophy and expression has been traditionally known as the Gurmat (literally the counsel of the gurus) or the Sikh Dharma.

Though it is one of the youngest of the major religions, it is the world's fifth largest organized religion, as well as the world's ninth-largest overall religion, with about 25 million Sikhs as of the early 21st century. Most Sikhs live in Punjab in India and, until India's partition, millions of Sikhs lived in what is now Pakistani Punjab. Sikhism emphasizes Simran (ਸਿਮਰਨ, meditation and remembrance of the words of God), which can be expressed musically through Kirtan, or internally through Naam japna ('meditation on His name') as a means to feel God's presence. It teaches followers to transform the "Five Thieves" (i.e. lust, rage, greed, attachment, and ego). The principal belief of Sikhism is faith in Waheguru — represented using the sacred symbol of Ik Onkar, the Universal God. Sikhism advocates the pursuit of salvation through disciplined, personal meditation on the name and message of God. A key distinctive feature of Sikhism is a non-anthropomorphic concept of God, to the extent that one can interpret God as the Universe itself.

The followers of Sikhism are ordained to follow the teachings of the ten Sikh Gurus, or enlightened leaders, as well as the holy scripture entitled the Shri Guru Granth Sahib Ji, which, along with the writings of six of the ten Sikh Gurus, includes selected works of many devotees from diverse socio-economic and religious backgrounds. The text was decreed by Guru Gobind Singh Ji, the tenth guru, as the final guru of the Khalsa Panth.

Sikhism is also called Sikhi or Gurmat or Sikh Matt or Aad-Matt.

The term Guru comes from the Sanskrit gurū, meaning teacher, guide, or mentor. The traditions and philosophy of Sikhism were established by ten Gurus from 1469 to 1708. Each Guru added to and reinforced the message taught by the previous, resulting in the creation of the Sikh religion. Guru Nanak was the first Guru and appointed a disciple as successor. Guru Gobind Singh was the final Guru in human form. Before his death, Guru Gobind Singh decreed in 1708, that the Gurū Granth Sāhib would be the final and perpetual Guru of the Sikhs. 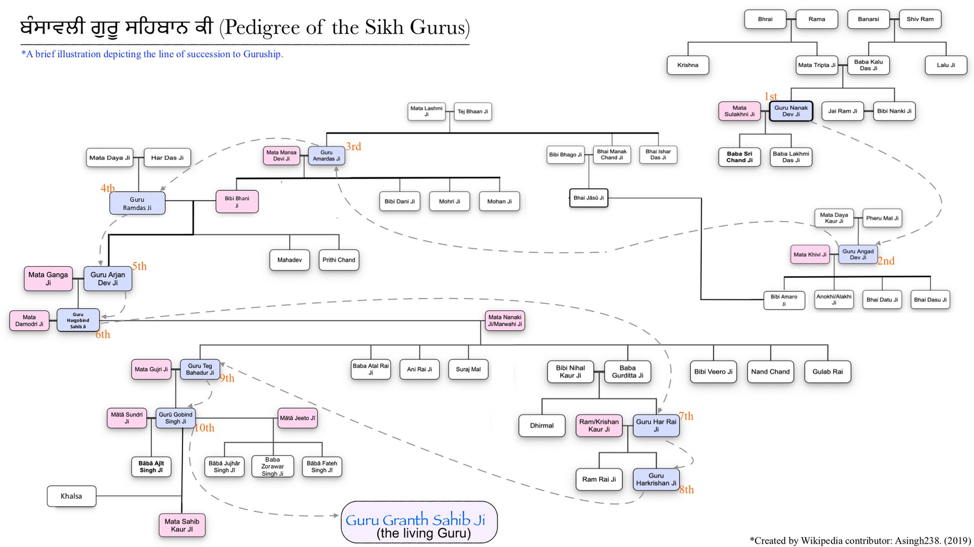